Sonnie Johnson is a dynamic and inspirational national speaker, Tea Party activist, and pundit.  Sonnie was formerly a host of Politichicks and is a regular contributor to Breitbart.com. She has appeared frequently on Fox News, including Hannity, and Red Eye, as well as Headline News. Sonnie is a frequent speaker at conservative and Tea Party events, including CPAC, Tea Party Patriots, David Horowitz’s Restoration Weekend, and many others.

Sonnie is the founder of “DidSheSayThat.com” where she provides cutting edge conservative commentary and opinion. Her strong and original voice on that site drew the attention of many conservative organizations, and she was soon introduced to the leaders of the Frederick Douglass Foundation, where she became the President of the Virginia chapter.

As President, she was offered numerous speaking engagements at Tea Party rallies and women’s conservative groups. Her first public speaking engagement was at the Roanoke Tea Party rally, where they called her the “star of the show.” It was on this speaking circuit that Sonnie began to stand out as a passionate, articulate, and powerful voice for conservative ideas and values, with a unique perspective, and began inspiring audiences.

Sonnie’s power as a speaker is her ability to synthesize policy ideas with street level tactics in a way that engages and inspires audiences of all stripes. She understands the intersection of culture, religion, economics, and politics and presents those ideas in a unique context that challenges the audience to see old ideas through a new lens.

In addition to speaking and television, Sonnie has also appeared in several documentaries, including Sarah Palin’s The Undefeated, Fire from the Heartland.

“Sonnie Johnson is the new face of the Conservative movement.”

“Sonnie has a very powerful message and it’s a logical and compassionate one.”

“Your passion is infectious. Don’t ever stop!”

“After listening to you, for a second, it felt like my friend (Andrew Breitbart) was still here.”

“I’ll fight beside you any day.”

Changing the Narrative: Modern urban culture grew out of a rejection of Progressive policies using free market principles – and how to spread that message.

Race & Culture: It’s not the civil rights war anymore. Today’s race culture promotes stasis and resentment, not opportunity. The Civil Rights “leaders” are out of touch with the Civil Rights soldiers.

Understanding the Destruction of the 60’s: MLK, Malcom X, the Black Panthers, and other 60’s radicals and their effect on modern public policy. 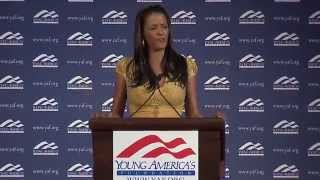