Ron Robinson has served as Young America’s Foundation’s president for more than four decades.  Time magazine wrote that Young America’s “[F]oundation—run by a former Reagan Administration advisor, Ron Robinson—is now the nation’s largest advocacy group devoted to student politics.” Time referred to Robinson as one of the “seasoned generals of the right” who is leading the “diverse and well funded” generation of conservatives who are “winning battles on campus.”Insight Magazine reported that under Robinson’s leadership, “Young America’s Foundation is leading the conservative charge to win the hearts and minds of impressionable college-age students…Indeed, the Foundation organizes so many programs on so many campuses that it’s difficult to find a conservative activist younger than 30 who hasn’t had some contact with its activities.”

Robinson has led the Foundation through two successful landmark Supreme Court victories for student rights; the inauguration and development of the National Conservative Student Conference and the National High School Leadership Conference held annually in Washington; and the Foundation’s effort to save Ronald Reagan’s ranch.

Robinson is a native of Buffalo, New York. He received a bachelor of arts degree in political science at Canisius College and a juris doctor degree at The Catholic University of America. Robinson served as executive director of Young Americans for Freedom (1977-79), president of the United States Youth Council (1983-85), and president of the International Youth Year Commission (1983-84). He was an advisor to the U.S. Department of Education during the Reagan administration. He is also co-author of Funding Fathers: The Unsung Heroes of the Conservative Movement (Regnery, 2008).

Robinson received the 2017 Annie Taylor Award from the David Horowitz Freedom Center. The annual award is named in honor of schoolteacher Annie Edison Taylor—the first person to survive a trip over Niagara Falls in a barrel—and given to people who exhibit great courage by “going over the ledge when others would be afraid to even go near it.”

Robinson has served on the boards of several conservative foundations and currently serves as a director of Citizens United and the Citizens United Foundation, a director of the American Conservative Union, and he is the vice-president of the Free Speech Defense and Education Fund. He also serves on the boards of the Strong Charitable Trust and the D.J. Findley Family Foundation.

Robinson is a member of the Virginia and U. S. Supreme Court Bars and resides with his wife, Michelle Easton, president of the Clare Boothe Luce Policy Institute, in Reston, Virginia. 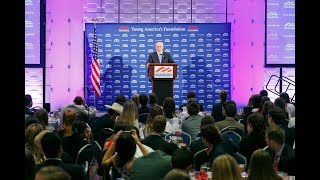