A native of Pennsylvania, Rick Santorum was a candidate for the Republican nomination for President of the United States in 2016, 2012, and became known as a voice for conservatives who didn’t feel their voice was being represented. His grassroots approach to campaigning – including visiting every one of Iowa’s 99 counties and his stunning victory in the Iowa caucuses – catapulted him to frontrunner status where he ultimately won 11 states and 3 million votes during the Republican primary process.

In June, 2012 Rick Santorum launched Patriot Voices, a grassroots and online community of Americans committed to promoting faith, family, freedom and opportunity. With a goal of recruiting one million members, Patriot Voices will transform the political landscape of our country.

Rick and his wife of 24 years, Karen, are the parents of seven wonderful children: Elizabeth, John, Daniel, Sarah Maria, Peter, Patrick and Isabella. And during his run for president, Rick spoke passionately about his belief that strong families help produce a strong economy. He shared his views that we must expand opportunities for all Americans by encouraging incentives for marriage, children, and free enterprise.

As an example of his commitment to improving our economy, Rick spoke often about his belief that we must renew America’s manufacturing sector to ensure that our nation isn’t just made of innovators but of those who can produce those innovations. Renewing our country’s manufacturing spirit will strengthen working families and help our struggling communities return to a path of prosperity during these tough economic times. Rick also believes we must support America’s domestic energy potential through pro-growth tax and regulatory reforms that will not only create jobs but strengthen our national security.

On the campaign trail, Rick was a voice for the voiceless. Voters across this country heard about Rick and Karen’s youngest daughter Isabella, who was born with a condition called Trisomy 18, and who wasn’t expected to survive her first birthday. Beating all the odds, Bella celebrated her 6th birthday in May of 2014 and is a joyful and loving little girl. Bella’s miraculous life has only strengthened Rick and Karen’s belief in the dignity of each of every life.

Furthermore, one of the key reasons that Rick chose to run for president in 2012 was because of the passage of Obamacare. He believes passionately that we must repeal Obamacare and replace it with a bottom up, patient — not government — driven system.

Prior to running for President, Rick served in the U.S. House of Representatives from 1991 to 1995, and in the U.S. Senate from 1995 to 2007 where he was known as one of the most successful government reformers in our history. Rick took on Washington’s powerful special interests from the moment he arrived in our nation’s Capitol in 1991. Along with John Boehner and Jim Nussle, Rick was a member of the “Gang of Seven” that exposed the Congressional Banking and Congressional Post Office scandals. It was this record of reform that prompted a Washington Post reporter to write that “Santorum was a tea party kind of guy before there was a tea party.”

Rick was also an author and floor manager of the landmark Welfare Reform Act which passed in 1996 that has empowered millions of Americans to leave the welfare rolls and enter the workforce.

He wrote and championed legislation that outlawed the heinous procedure known as Partial Birth Abortion as well as the “Born Alive Infants Protection Act,” the “Unborn Victims of Violence Act,” and the “Combating Autism Act” because he believes each and every individual has value and the most vulnerable in our society need to be protected.

Rick fought to maintain fiscal sanity in Washington before it was in fashion, fighting for a balanced budget and a line item veto. He bravely proposed reforming entitlements, cutting spending and even developed a “spendometer” that added up the cost of Democrat amendments to spending bills. This record made him one of the most conservative senators in Pennsylvania’s history.

Rick served eight years on the Senate Armed Services Committee where he led the fight before the attacks of September 11th, 2001 to transform our military from a Cold War force to meet today’s threats. He was a leader on US-Israeli relations, authoring both the “Syria Accountability Act” and the “Iran Freedom and Support Act” which he successfully fought to pass in spite of initial opposition by President Bush. Rick firmly believes that we cannot allow Iran to obtain a nuclear weapon. An accomplished author, Rick Santorum penned the 2005 New York Times best seller It Takes a Family. 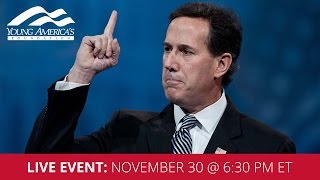