Newt Gingrich is well-known as the architect of the “Contract with America” that led the Republican Party to victory in 1994 by capturing the majority in the U.S. House of Representatives for the first time in forty years. After he was elected Speaker, he disrupted the status quo by moving power out of Washington and back to the American people. Under his leadership, Congress passed welfare reform, the first balanced budget in a generation, and the first tax cut in sixteen years. In addition, the Congress restored funding to strengthen defense and intelligence capabilities, an action later lauded by the bipartisan 9/11 Commission.

Today Newt Gingrich is the co-host of CNN’s Crossfire, where he continues to advocate bold policy ideas.

From May 2011 to May 2012, Newt Gingrich was a candidate for the Republican nomination for President of the United States, winning the South Carolina and the Georgia primaries. The campaign was especially notable for its innovative policy agenda, its effort to bring new coalitions into the Republican fold, and for Newt’s debate performances. His $2.50 a gallon energy plan set off a nationwide discussion about the use of America’s energy resources.

But there is a lot more to Newt Gingrich than these remarkable achievements. As an author, Newt has published twenty-four books including 14 fiction and nonfiction New York Times best-sellers.

Non-fiction books include his latest, A Nation Like No Other, in addition to Ronald Reagan: Rendezvous with Destiny, To Save America, Rediscovering God in America, 5 Principles for a Successful Life, Drill Here, Drill Now, Pay Less, Real Change, A Contract with the Earth, Winning the Future: A 21st Century Contract with America, To Renew America, Lessons Learned the Hard Way, Saving Lives & Saving Money, Window of Opportunity, and The Art of Transformation. He is also the author of a series of historical fiction books including, Gettysburg, Grant Comes East, Never Call Retreat: Lee and Grant the Final Victory, 1945, Pearl Harbor, Days of Infamy, To Make Men Free, To Try Men’s Souls, Valley Forge, and his latest, Victory at Yorktown. These novels are active history studies in the lessons of warfare based on fictional accounts of historical wartime battles and their aftermaths.

In his post-Speaker role, Newt has become one of the most highly sought-after public speakers, accepting invitations to speak before prestigious organizations throughout the world. Because of his own unquenchable thirst for knowledge, Newt is able to share unique and unparalleled insights on a wide range of topics. His audiences find him to be not only educational but also inspirational.

Widely recognized for his commitment to a better system of health for all Americans, his leadership in the U.S. Congress helped save Medicare from bankruptcy, prompted FDA reform to help the seriously ill and initiated a new focus on research, prevention, and wellness. His contributions have been so great that the American Diabetes Association awarded him their highest non-medical award and the March of Dimes named him their 1995 Citizen of the Year.

To foster a modern health system that provides better outcomes at lower cost, Newt launched the Center for Health Transformation in 2003, and continued there in a leadership role until he stepped down in 2011 to seek the Republican nomination for President of the United States.

Recognized internationally as an expert on world history, military issues, and international affairs, Newt served as a Member of the Defense Policy Board. He was the longest-serving teacher of the Joint War Fighting course for Major Generals. He also taught officers from all five services as a Distinguished Visiting Scholar and Professor at the National Defense University. Newt was a member of the Terrorism Task Force for the Council on Foreign Relations. In 2005, Newt co-chaired the Task Force on U.N. Reform, a bi-partisan Congressional effort to reform the United Nations.

In 1999, Gingrich was appointed to the United States Commission on National Security/21st Century, Hart/Rudman Commission, to examine our national security challenges as far out as 2025. The Commission’s report is the most profound rethinking of defense strategy since 1947. The report concluded that the number one threat to the United States was the likelihood over the next 25 years of a weapon of mass destruction – nuclear, chemical, and/or biological – being used against one or more major cities unless our defense and intelligence structures underwent a massive transformation. That report was published six months before September 11.

Because of his work on the Hart/Rudman Commission, Newt Gingrich is credited with the idea of a Homeland Security Agency with a Secretary to serve on the Cabinet level. President George W. Bush later created the Department of Homeland Security.

From 2007 until his 2012 presidential bid, Newt served as General Chairman of American Solutions for Winning the Future. He has also been a Senior Fellow at the American Enterprise Institute in Washington, D.C., and a Distinguished Visiting Fellow at the Hoover Institution at Stanford University in Palo Alto, California. Newt is also a news and political analyst appearing regularly on cable and broadcast news programs.

Newt Gingrich is a leading advocate of increased federal funding for basic science research. In 2001, he was the recipient of the Science Coalition’s first Science Pioneer award, given to him for his outstanding contributions educating the public about science and its benefits to society.

Gingrich, a strong advocate of volunteerism, has long championed the positive impact every individual can have on society. He has raised millions of dollars for charity, donating both time and money to a wide array of causes, including Habitat for Humanity, United Cerebral Palsy, the American Cancer Society, and ZooAtlanta. As a former environmental studies professor, he is widely recognized for his commitment to the environment and to the advancement of a new, common-sense environmentalism. In 1998, the Georgia Wildlife Federation named him Legislative Conservationist of the Year.

Newt was first elected to Congress in 1978 where he served the Sixth District of Georgia for twenty years. In 1995, he was elected Speaker of the U.S. House of Representatives where he served until 1999. The Washington Times has called him “the indispensable leader” and Time magazine, in naming him Man of the Year for 1995, said, “Leaders make things possible. Exceptional leaders make them inevitable. Newt Gingrich belongs in the category of the exceptional.”

His experiences as the son of a career soldier convinced him at an early age to dedicate his life to his country and to the protection of freedom. Realizing the importance of understanding the past in order to protect the future, he immersed himself in the study of history, receiving his Bachelor’s degree from Emory University and Master’s and Doctorate in Modern European History from Tulane University. Before his election to Congress, he taught History and Environmental Studies at West Georgia College for eight years.

Newt resides in McLean, Virginia with his wife, Callista Gingrich. 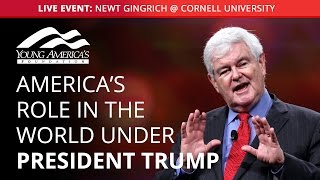