Larry E. Schweikart, a former rock drummer who opened for “Steppenwolf,” is an American historian and the author of more than a dozen books.

Dr. Schweikart was born on April 21, 1951 in Mesa, AZ and lived in Higley, AZ, where his father Earl was a ranch foreman for the Daugherty Ranch. Earl was a rodeo roper and excellent horseman. In 1961, Earl died and LS moved with his mother, Eunice, to Chandler where he attended Chandler High School from 1964 to 1968. He then enrolled in Arizona State University in the Political Science Program.

Throughout high school and college, however, Dr. Schweikart spent most of his time playing drums in a variety of rock bands, and in 1972 upon graduation he joined a band called “Goldmyne” led by John Tatum, formerly of the “Earwigs,” which was the forerunner to “Alice Cooper.” (Tatum has since gone on to a Christian music ministry in California). Tatum and his wife, Alice, currently a jazz singer in Phoenix, fleshed out the band with several other musicians and over a period of about two years the band played clubs in the Midwest, southwest, and Canada. When that group broke up, he played in several other groups before joining “Rampage,” a southern-rock group that opened for “Steppenwolf,” “Savoy Brown,” and “Mother’s Finest.” The band cut several records, one of which had limited release and was reviewed by Billboard and Record World.

Leaving the band in the mid-1970s, he returned to Arizona where he re-entered ASU to obtain a teaching certificate, taking a history course that inspired him to become a history professor. He entered the ASU Master’s program, publishing two national Phi Alpha Theta prize-winning articles in consecutive years—at that point, the only time that had ever occurred. Upon receiving the MA, he was admitted to the University of California, Santa Barbara, and had already published his first book, A History of Banking in Arizona. During his study at UCSB, he published his second book, a study of the Trident submarine program with his former professor at ASU, D. Douglas Dalgleish. Graduating in 1984, LS took a one-year position at the University of Wisconsin-Richland Center, then, in 1985, received an appointment to the University of Dayton. His doctoral dissertation, published as Banking in the American South was awarded one of the top three economic history dissertations in the United States.

Since arriving at UD, Dr. Schweikart taught business and economic history, then military history. In the 1990s he began to focus on “trade” books as opposed to academic or textbooks, beginning with his history of American business, The Entrepreneurial Adventure, than in 2004, after almost a decade of research and writing, co-authored the best-selling U.S. history book, A Patriot’s History of the United States. He continued to publish major trade books on national defense, history and historiography, and the U.S. economy. 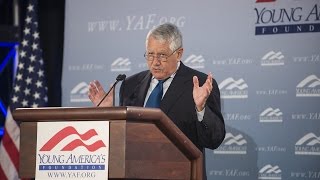