Kate has been involved with Young America’s Foundation since her days as a student at the University of Virginia. While UVA, she edited the campus conservative newspaper and organized a state-wide rally in support of America’s troops.

Kate is the author of Divider in Chief: The Fraud of Hope and Change. A popular speaker and commentator on national television and radio shows, Kate has spent her career championing expanded liberty in America, and impressing upon young people an understanding of the blessings of freedom.

Kate has been speaking on college campuses for 24 years, has appeared on Fox News, CNBC, and MSNBC, has written for numerous publications and been on hundreds of radio shows. She has appeared regularly on Fox New’s The O’Reilly Factor and Hannity.

In 2004, she founded the Jennifer Byler Institute, a leadership training program for women in Virginia.

She is currently a member of the Clare Boothe Luce Policy Institute’s Board of Director and Young America’s Foundation’s Alumni Board, having formerly served on the Steamship Institute’s Advisory Board and the NRA’s National School Shield Advisory Board.

Kate is a regular speaker for gatherings—civic, corporate, educational, and religious—all across the country, and is known for her inspirational style.

She is also a writer, blogger and small business owner.  Her most treasured role, however, is that of mother to six children. Currently, she resides in Charlottesville, Virginia with her husband and children. 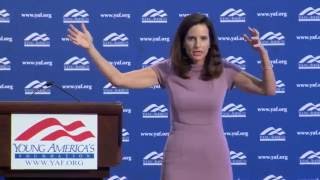