Jesse Watters currently serves as the host of Watters’ World (Saturdays, 8PM/ET) and co-host of The Five on Fox News Channel (FNC).  He joined the network in 2002 as a production assistant.

Jesse has been working with the top-rated cable news show, The O’Reilly Factor since 2003. He began hosting monthly specials in November 2015, which later progressed to a weekly program in January 2017.

Capitalizing on his original style, the weekly Watters’ World program is an extension of Jesse’s segments on “The Factor,” which showcase his popular man-on-the-street interviews and provide viewers a comedic look at the latest headlines. Jesse travels to different locations and quizzes individuals about politics, pop culture, and current events. Additionally, he features a rotating panel of commentators, debating on news of the day, as well as interviews with high-profile guests. 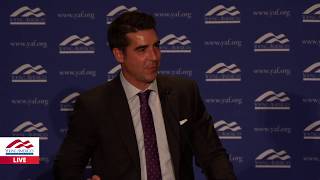