Jared Meyer is a staff member at the White House Council of Economic Advisors and a former advisor at the Department of Labor and senior research fellow at the Foundation for Government Accountability. At FGA, he researches the economic effects that various government regulations have on labor markets.

Meyer is the coauthor of Disinherited: How Washington Is Betraying America’s Young (Encounter Books, May 2015) and the author of Uber-Positive: Why Americans Love the Sharing Economy (Encounter Books, June 2016). He has testified before various congressional committees, including the Joint Economic Committee, House Education and the Workforce Committee, House Budget Committee, and House Judiciary Committee. Meyer is also a member of Forbes’ 30 Under 30 for Law and Policy.

Meyer’s research has been published in outlets such as The Wall Street Journal, Forbes, New York Post, and National Review. He has appeared on many radio and television shows, including the BBC World Service, ABC, Fox News, and NPR.

Prior to joining FGA, Meyer was a fellow at the Manhattan Institute for Policy Research. He has also worked as a research assistant for the political philosopher Douglas Rasmussen. Meyer received a B.S. in finance and a minor in the philosophy of law from St. John’s University in New York City. You can follow him on Twitter @JaredMeyer10.

“Why Americans Love the Sharing Economy”

“The Government’s War on the Sharing Economy”

“Are Millennials the Start-up Generation?”

“Is Uber the Future of Work” 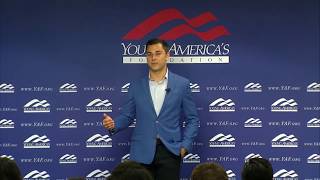