Dr. Jake Jacobs  is president and founder of POLITICALLY INCORRECT INSTITUTION,, the Host of Freedom Project Academy’s ONE NATION and the author of Mobocracy: The Cultural and Political  War to Destroy Our Republic under God and Mother Should I Trust The Government:The Making and Keeping of our American Republic.

Dr. Jacobs has spent more than 30 years at the public and private high school system, and at the college level teaching his passion for our Constitutional Republic under God, all the while stressing historical correctness, in the face of politically correct intimidation by the academic establishment.

When Dr. Jacobs was a public High School teacher he publicly defended Wisconsin Governor Scott Walker on Fox & Friends. Jake is a frequently requested speaker for, Young American’s for Freedom, a regular guest on Conservative Radio and very popular at Tea Party, civic and church events. He is a dynamic and energized speaker, writer, and historian who will not only get your audience’s attention, but move them to action!

Dr. Jake Jacobs has been married for 32 years to his lovely wife Lori and has two children Joseph 28 and Anastasia 25. When he’s not writing, teaching or speaking he loves watching the Green Bay Packers and enjoys his fire-pit at night, watching the Heavens declare God’s Glory. 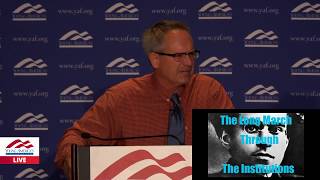