Humberto was born in Havana Cuba in 1954 and fled Cuba in 1961 with his family to New Orleans while his father was Castro and Che’s political prisoner. He has lived in the New Orleans area since 1961, earning a B.A. in Political Science from the University of New Orleans and a Master’s Degree in Latin American Studies from Tulane University.

Humberto’s second book, The Hellpig Hunt, is described by Publishers Weekly as “Fun, forceful and compelling” and by Ted Nugent as, “Just what the doctor ordered! Humberto’s books read like my concerts sound!” The reviewer for the New Orleans Times Picayune wrote:”As a Feminist I should be OUTRAGED by this book, and as an animal-rightist I should be absolutely horrifed! But while reading it I couldn’t stop laughing long enough to summon up the righteous indignation.”

Fidel: Hollywood’s Favorite Tyrant, Humberto’s third book, was a Conservative Book Club “Main Selection” hailed by the Weekly Standard as a “a great service for liberty, justice and truth”, and by Bill O’Reilly as “a great expose’ of Hollywood pinheads.” Newsmax magazine considers it, “The sharpest knee ever thrust into the groin of Castro’s rule. The Bearded-One will never stand up straight again.”

Humberto’s latest book is titled, Exposing the Real Che Guevara and the Useful Idiots Who idolize Him.Investors Business Daily says: “Finally, the true story of one of history’s most undeservedly idolized mass-murderers.” Columnist and Radio host Michael Medved calls it, “a superb and badly-needed book. Also a very funny book.”

Radio host Mark Levin said “I read it in two sittings. I couldn’t put it down.”

David Horowitz says: “A great service for the cause of decency and human freedom. Deservedly puts Che Guevara in the ash-heap of history. Every American should read this book.”

Humberto is a columnist for Newsmax, Human Events, Frontpage Magazine along with many outdoor publications including Scuba Diver, Salt Water Sportsman, Bowhunter, and Boating Magazine. His article for Sierra magazine titled, “Why We Hunt,” provoked the biggest blizzard of hate-mail in the magazine’s history.

Humberto was a regular guest on Bill Maher’s Politically Incorrect, and has been featured on The O’Reilly Factor, Hannity & Colmes, The Dennis Miller Show, Fox & Friends among many others. He has been a featured speaker at David Horowitz’ Restoration Week-End, at the Horowitz Freedom Center, The John Locke Foundation, Miami Book Festival, Palm Springs Book Festival, Club Mensa’s Annual Gathering among many campus venues. His speech on “The Real Che Guevara” at Washington University in St Louis provoked a liberal faculty furor (hearing fully-documented historical facts caused them to storm out of the auditorium in a huff. 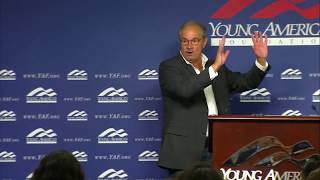