HERMAN’S YOUTH AND THE AMERICAN DREAM

Herman Cain grew up in Atlanta, Georgia with loving parents and little else. His father worked three jobs—as a janitor, a barber and a chauffeur—and his mother was a domestic worker. Even though these jobs required hard work and little glamour, his parents knew this life was better than the dirt farms upon which they grew up. They also knew that this hard work was the key to achieving their American Dreams.

Herman’s parents had two dreams. First, they wanted to own their own house. Secondly, they wanted both of their children to graduate from college. During the segregation era in the Deep South, these aspirations might have seemed lofty, but they knew that if they kept their faith in God, faith in themselves and faith in the greatest country on the Earth, they could achieve.

The first dream was realized in a modest brick house on Albert Street in Atlanta, Georgia. After years of saving from his many jobs, Herman’s father surprised the whole family, even his wife, by purchasing a home for their family. The second dream was realized when Herman graduated from Morehouse College with a degree in mathematics in 1967. His brother, Thurman, would go on to graduate from Morris Brown College.

Inspired by the work ethic and character of his parents, Herman continued his education by earning his Master’s degree in computer science from Purdue University while working full-time developing fire control systems for ships and fighter planes for the Department of the Navy. Though Herman enjoyed using his talents as a civilian employee for the Navy, he gravitated towards the culture of business.

Herman returned to his home of Atlanta to begin working as a computer systems analyst for the Coca-Cola Company. After considerable success at Coca-Cola, he moved to the Pillsbury Company. Within a short period of time, Herman rose to position of Vice President. Although the comforts of a corner office on the 31st floor of a majestic corporate building seemed satisfying, Herman knew that he needed a challenge.

He became the regional vice president of Pillsbury’s Burger King division. This meant starting from the “ground up,” dodging grease fires and broiling hamburgers. Herman was assigned to lead a low performing region of 450 of their restaurants. Within three years, it became the best performing region in the company.

Energized by overcoming the many obstacles of his job at Burger King, Herman took on the biggest challenge of his career. He accepted the call to become the President and CEO of Godfather’s Pizza, a company that was teetering on the edge of bankruptcy. In just 14 months, Herman returned Godfather’s to profitability and he led his management team to a buyout of the company.

His professional successes garnered the respect and admiration of industry peers who named him the President of the National Restaurant Association. Under Herman’s administration, the group grew significantly and began to lobby for the interests of America’s restaurateurs and small business owners.

In 1994, as head of the National Restaurant Association, he had the opportunity to speak with President Clinton during a nationally televised town hall meeting. Here, Herman challenged the President regarding the impact on businesses if his health care overhaul proposal were passed. President Clinton attempted to assure him and the millions of viewers watching at home that his legislation would not harm American business owners and their employees.

Herman was skeptical. “Quite honestly Mr. President, your calculations are incorrect,” he said. “In the competitive marketplace, it simply doesn’t work that way.” His words echoed across America, and Newsweek named Herman Cain the primary saboteur of Hillarycare.

Through these and other appearances on behalf of the National Restaurant Association, Herman began working with business leaders across all sectors of the American economy. This led to his acceptance of a position on the Board of Directors of the Federal Reserve Bank of Kansas City, and he was subsequently elected their chairman. In this role, he analyzed economic conditions in the region and notified the Federal Reserve of how their policies should respond.

After coming in an impressive second in his 2004 bid for the United States Senate in Georgia, Herman soon became the host of his own radio talk show, “The Herman Cain Show,” on Atlanta’s WSB 750 AM/ 95.5 FM.

Today, as a former Republican candidate for the Presidency and seasoned business leader, he remains an active and outspoken voice for conservative issues. In January 2013, Herman began the next phase of his life’s journey with the start of the nationally syndicated Herman Cain Show, heard on many radio stations from 9 – noon daily.  To complement the radio show, Herman also established www.hermancain.com which offers a constant flow of commentary, news, audio, video, humor, and reader/listener interaction, and www.cainradioraw.com which offers the radio show on demand and without commercials.  Then, with the help and success of The Herman Cain Show, WSB Radio was honored with the distinction of being the 2015 National Association of Broadcasters’ (NAB) Marconi Award Winner for News/Talk Station of the Year.

Despite the many professional commitments of his life, Herman continues to enjoy most the time spent with family and friends. As his children got married and had their own children, he knew that he had an extraordinary obligation to do what he could to make this a safe and prosperous nation for them. The paramount joys in his life are his wife, Gloria, his children and his grandchildren. 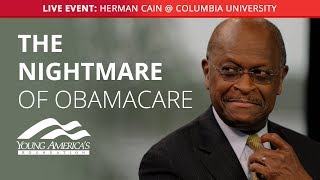