George F. Allen served the Commonwealth of Virginia for over twenty years, as Governor, in both bodies of the United States Congress, and as a delegate holding Thomas Jefferson’s seat and Assistant Minority Leader in the Virginia General Assembly.

Sworn in as Governor in 1994 George Allen brought sweeping reform that made Virginia a national model in economic development, public safety, education accountability, and good government.  As a self-described “Common Sense Jeffersonian Conservative,” Allen pushed through cutting edge reform with bipartisan support in a legislature held by the opposition:

Elected to the United States Senate in 2000, George Allen continued to advocate policies to make America and Virginia a leader in innovation and technology.  In 2001, he was appointed Chairman of the Senate High Tech Task Force and later in his term he created the Competitive Caucus to keep America the “world capital of innovation”.  Allen was a member on the Commerce, Science and Transportation Committee, Small Business and Entrepreneurship Committee, the Energy and Natural Resources Committee as well as Chairman of the Senate Foreign Relations Committee’s Subcommittee on European Affairs.

Senator Allen was unanimously elected a member of the Senate Republican Leadership as Chairman of the National Republican Senatorial Committee in 2002.  Under Senator Allen’s leadership, Republicans gained four seats in the Senate and expanded the Republican majority to 55-44-1.

Governor Allen served as National Co-Chairman of Fred Thompson’s Presidential Campaign and as an advisor to and surrogate for John McCain’s Presidential Campaign on Economic Competitiveness and American Energy Security as well as Nanotechnology. Governor Allen also served as the Chairman of the Coalition for a Democratic Workplace, which supported Senate candidates who wished to protect private ballots in unionization voting.

In June of 2009, Governor Allen launched, and serves as Chairman of, the American Energy Freedom Center, whose mission is to advocate positive ideas for American jobs, economic prosperity and promote increased freedom, opportunity, and competition in the development and use of our vast energy resources. Associated with the Institute for Energy Research, the American Energy Freedom Center is a 501(c)(3) nonprofit educational organization.

George Allen holds a B.A. degree “with distinction” in History, as well as a law degree from the University of Virginia. He played on the football and rugby teams during his time at UVA. Allen was named All-ACC Academic Team, Quarterback in 1972.

Allen now serves on the Reagan Ranch Board of Governors of Young America’s Foundation where he is a Reagan Ranch Presidential Scholar. He and his wife, Susan, reside near Mt. Vernon in Fairfax County and have three children: Tyler, Forrest, and Brooke.

To host this speaker for your event, please call Patrick Coyle at 800-USA-1776. 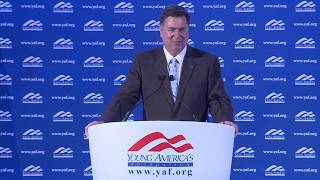