Dr. Everett Piper is the fifth president of Oklahoma Wesleyan University, established in 1909.

In his 14 years as president of OKWU, Piper has become known for his passionate defense of intellectual freedom. He advocates tirelessly for cultural courage grounded in the conservation of time-tested truths, and is the 2016 recipient of the Jeane Kirkpatrick Award for Academic Freedom. Dr. Piper is the author of Why I Am A Liberal, and Other Conservative Ideas and the viral op-ed, “This is not a Daycare, It’s a University”. His op-eds are routinely featured in local and national news outlets and he serves as a regular guest on talk-radio across the nation.**

A native of Hillsdale Michigan, Dr. Piper and his wife Marci, along with their two sons, have served as OKWU’s First Family since August of 2002. Dr. Piper actively participates in the Bartlesville community, and serves on a variety of councils and boards relating to Conservativism, leadership, public policy, and community leadership.

1.  Why I’m A ‘Liberal’ and Other Conservative Ideas
2.  Reclaiming Words – He who Defines the Terms Wins the Debate
3.  This Is A University, It’s Not A Day Care
4.  Ideological Fascism or Intellectual Freedom
5.  Disagreement Is Not Hate
6.  Pro-Woman and Proud of It:  Women Are Real 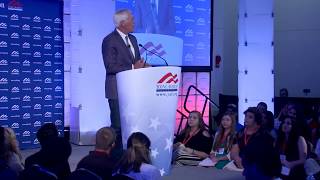