New York political commentor Deroy Murdock is a Fox News Contributor, a contributing Editor with National Review Online, a former Media Fellow with the Hoover Institution on War, Revolution and Peace at Stanford University; and a Senior Fellow with the Atlas Network, which supports and connects some 475 free-market think tanks in the USA and some 95 countries world-wide. Mr. Murdock’s weekly column — “This Opinion Just In…” — appears in the New York Post, The Dallas Morning News, The New Hampshire Union Leader, and other newspapers across America.

As a popular public speaker, Murdock has lectured or debated at the Cato Institute, the Council on Foreign Relations; Harvard Medical School, the Heritage Foundation; the National Academy of Sciences; Dartmouth, Stanford, and Tulane universities; and various fora, from Bogotá to Buenos Aires to Budapest. He is a native of Los Angeles, a graduate of Georgetown University, and a resident of Manhattan, where he earned an MBA from New York University. His program included a semester of study at the Chinese University of Hong Kong.

Deroy Murdock hopes that someday the free society will bring him — and every American — more leisure time to experience fine dining, motion pictures, skiing, live music, and the priceless joys of family, friends, and loved ones. 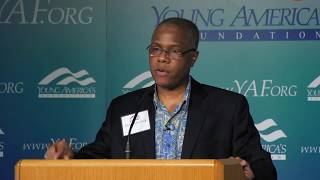