Historian Burt Folsom is the longest serving faculty member of Young America’s Foundation’s student programs, where he consistently receives top ratings from the young people he reaches at each YAF event.

Burton Folsom, Jr. is an economic historian, which means that he studies the economy to discover what has worked and what hasn’t. Why do some cities grow and prosper while others wither and decay? How do entrepreneurs build companies and offer jobs to thousands of people? What effect does government have on business? Burt enjoys discovering the answers to those questions. He believes that Americans are an inventive people, no matter their backgrounds, and throughout our nation’s history, American entrepreneurs have benefitted the world with their innovations.

As a teacher, Burt served as Professor of History at Hillsdale College from 2003 to August, 2017, holding the Charles Kline Chair in History and Management. He is now Professor Emeritus and was appointed a Distinguished Fellow of Hillsdale College in the summer of 2017.

Burt’s career began in 1976, when he received his Ph.D. from the University of Pittsburgh. He spent the first 18 years of his teaching career at Murray State University. From 1994 to 1999 he served as Senior Fellow in Economic Education at the Mackinac Center for Public Policy, Michigan’s free market think tank, and then from 1999 to 2003 at The Center for the American Idea in Houston, Texas.

Burt has spent his life energized by the belief that freedom and free markets benefit all people. He has published 11 books, some co-authored, and also hundreds of columns and articles in newspapers and journals. Many of Burt’s most popular columns are available at his website: BurtFolsom.com.

After the success of New Deal or Raw Deal, Burt and his wife Anita co-authored the sequel: FDR Goes to War: How Expanded Executive Power, Spiraling National Debt, and Restricted Civil Liberties Shaped Wartime America (Simon & Schuster, 2011). The Folsoms cover the period from the 1930s through the end of World War II, and the post-war recovery. Did FDR provoke war with Japan? Did FDR exceed legal limits during the war as he issued executive orders and his administration regulated all areas of American society? Burt and Anita also show how Americans met the challenges of World War II, to invent and build the weapons of war to give our fighting men and women what was needed. The US and its Allies developed penicillin, landing craft, sophisticated radar systems dehydrated foods, DDT, and hundreds of other innovations to win the war.

The Folsoms’ next volume was Uncle Sam Can’t Count: A History of Failed Government Investments, from Beaver Pelts to Green Energy (Simon & Schuster, 2014). Few Americans know that President George Washington supported the first government-subsidized business, the fur industry. What happened? It was a disaster. Uncle Sam Can’t Count traces the history of subsidies in canals, railroads, airplanes, and energy through American history, along with stories of private business and its successes.

Their most recent book covers a very different topic. Death On Hold: A Prisoner’s Desperate Prayer and the Unlikely Family Who Became God’s Answer (Thomas Nelson [HarperCollins], 2015) is the story of the Folsom’s friendship with death row inmate Mitchell Rutledge, a man without hope who was given a future. This narrative is an easy-to-read, real life tale of God’s intervention in one man’s life.

Burt and Anita have one son, Adam, who is an entrepreneur and lives in Atlanta, Georgia. 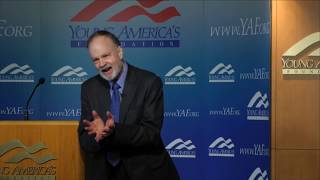