Ann McElhinney is a NYT best-selling author, journalist, film producer and director, podcast host and one of the most successful crowdfunders in the world.

She and her husband, journalist Phelim McAleer have written the NYT Best Seller Gosnell – The Untold Story of America’s Most Prolific Serial Killer, published by Regnery and available on Amazon, Barnes & Noble and Books A Million. The book debuted at #3 Amazon Best Seller and sold out in 3 days after publication.

She produced the Gosnell movie, with Phelim McAleer and Magdalena Segieda. They financed the movie by running a massive crowdfunding campaign on Indiegogo. It was the most successful Indiegogo campaign ever. Almost 30,000 people funded the film contributing over

Gosnell is a ripped from the headlines story about a respected doctor who ran a medical clinic in an impoverished Philadelphia neighborhood. But behind the doors of his clinic the smiling, avuncular Kermit Gosnell was also America’s most prolific serial killer.

The project has attracted an enormous amount of media coverage on television, radio and with hundreds of articles written about the book, film and the historic crowdfunding.

McElhinney co-hosts with her husband Phelim McAleer a weekly podcast The Ann and Phelim Scoop where they investigate and report unreported stories, comment on politics, culture, uncork beverages and share recipes. The show is available on all major podcast platforms and on YouTube.

Most recently, McElhinney co-produced a theatrical event FBI Lovebirds: UnderCovers, staged at the Reagan Building in DC. The play exposes how top FBI operatives tried to

destroy President Trump’s campaign and his presidency by starting the “Russia Collusion” investigation. This play was filmed before a live audience and will be released online.

The Federalist said FBI Lovebirds: UnderCovers was a “comedic hit” and “plays like a ‘Saturday Night Live’ sketch, only every word is true and it’s actually funny.”

Politico called it “Hamilton for the MAGA crowd”.

Even the left-leaning publication The Guardian had to admit the play was “Compelling, excruciating…” and that “Dean Cain was perfectly cast…”. HBO’s Vice News called it “Underground, edgy” and “The most dangerous play in Washington DC”.

McElhinney is the director and producer of FrackNation – A Journalist’s Search for the Fracking Truth, a documentary on hydraulic fracturing (fracking) and the natural gas boom in the US and abroad.

FrackNation premiered January 22, 2013 on Mark Cuban’s AXS TV and was later picked up for distribution by Magnolia Pictures. The New York Times called the film “meticulously researched…provocative.” Variety said it was a “briskly paced…mischievous pic.”

FrackNation bypassed traditional funding methods and instead turned to Kickstarter, a crowd- funding website. In 60 days, 3,305 backers donated $212,265 to tell the truth about fracking. It was one of the most successful campaigns in Kickstarter history.

In 2009, she produced and directed Not Evil Just Wrong, a film which examines the devastating consequences of global warming hysteria.

Previously, McElhinney produced and directed Mine Your Own Business – the first documentary that asks difficult questions of the environmental movement. Canada’s The National Post said “Mine Your Own Business is devastating because it combats prejudices and fantasies with pictures that refute thousands of weasel words.”

McElhinney has also made documentaries for the BBC, CBC (Canada) and RTE (Ireland). The Search for Tristan’s Mum concerned the case of Tristan Dowse, a baby who was adopted by an Irish man and his wife in Indonesia. Two years later, when the adoptive mother became pregnant, they abandoned Tristan in an Indonesian orphanage.

The case outraged Ireland and McElhinney tracked down Tristan’s natural mother and, going undercover, infiltrated the baby-selling ring. Tristan is now living with his natural mother in Indonesia and the baby sellers are serving lengthy jail sentences.

The Irish government initiated a high court protection order to protect Tristan’s interests and when delivering his judgment, Justice John McMenamin said McElhinney deserved the “highest of praise” for her investigative journalism.

McElhinney was featured in and was the Associate Producer of the highly controversial documentary Return to Sender (2005) for CBC.

McElhinney has also written for or is a regular contributor to an array of international media organizations including CNN, FOX News, ABC (US), BBC, CBC (Canada), ABC (Australia), RTE (Ireland), The Sunday Times and The Irish Times. She is a regular on a number of US talk radio shows including The Hugh Hewitt Show, The Dennis Miller Show and The Dennis Prager Show.

McElhinney has worked as a journalist and filmmaker in the US, Canada, Romania, Bulgaria, Chile, Indonesia, Cambodia, Vietnam, China, Ghana and Uganda.

She is an entertaining and sought-after public speaker.

McElhinney produces and directs with her husband Phelim McAleer.

Gosnell: The Untold Story of America’s Most Prolific Serial Killer (2017)

Mine Your own Business (2006) Director, Producer

The Search for Tristan’s Mum (RTE, 2005) On Screen Journalist

2) FrackNation: How the fracking revolution changed everything

3) The Dangers of Environmentalism

4) Capitalism – A Love Story: How I rejected liberalism and learned to love Capitalism 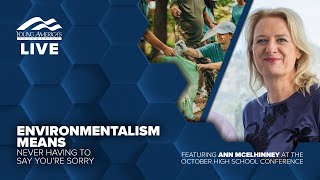