Andrew Klavan is the author of such internationally bestselling crime novels as True Crime, films by Clint Eastwood, Don’t Say A Word, films starring Michael Douglas and Empire of Lies.  Stephen King called him “the most original novelist of crime and suspense since Cornell Woolrich.”  He has been nominated for the Mystery Writers of America’s Edgar Award five times and has won twice.  He has also won the Thumping Good Read Award from WH Smith and been nominated twice for the Bouchercon’s Anthonys.  His books have been translated around the world.  His most recent book is a memoir of his religious journey The Great Good Thing: A Secular Jew Comes to Faith in Christ. His most recent work of fiction is the serial fantasy-thriller podcast Another Kingdom, available on iTunes and other podcast venues.

Andrew has also written thrillers for young adults, including the bestselling Homelanders series, which follows a heroic teenager’s battle against terrorists.  His YA novel If We Survive was nominated for an International Thriller Writers award and his novel Game Over was nominated for Best Inspirational Novel by the publishing trade journal Romantic Times.

Andrew is a contributing editor to City Journal, the magazine of the Manhattan Institute, and has written numerous articles for them, including a report from an embed with American troops in Afghanistan and a consideration of the politics of William Wordsworth.  His essays and op-eds on politics, religion, movies and literature have appeared in the Wall Street Journal, the New York Times, The Washington Post, the LA Times, and elsewhere.  He also created the popular satire video features, “Klavan on the Culture,” for PJTV, “A Very Serious Commentary” for Glenn Beck’s Blaze TV, and “The Revolting Truth,” for Truth Revolt. He currently does a Monday through Thursday podcast The Andrew Klavan Show for the Daily Wire.

As a screenwriter, Andrew wrote the screenplays to “A Shock to The System,” which starred Michael Caine, and “One Missed Call,” which starred Edward Burns.  He also wrote the script for the groundbreaking ios app, “Haunting Melissa,” which won the 2014 Appy Award for Entertainment.

Topics:
Pursuit of Happiness – “Everything You Know About Western Culture is Wrong”
Media – “Hollywood Hates Your Guts”/ “It’s All Fake News”
Race – “Thanks Christian White Men”
Feminism – “Why I’m An Anti-Feminist” 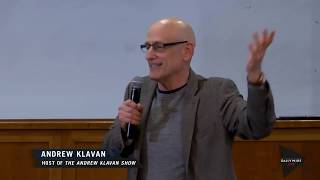